We've updated the HTML template editor to improve experience of editing html templates and to pave the way for future improvements to the overall content editing experience.

The HTML editor now features a two panel view for editing html and previewing the output. Each panel can be collapsed to focus on each task. We've also included Undo/Redo actions, Search and a Beautify option that cleans up and makes your html more readable.

Your HTML templates can now be viewed in a grid of thumbnails showing a visual preview of each template. The existing list view is also still available and your preference will be remembered. 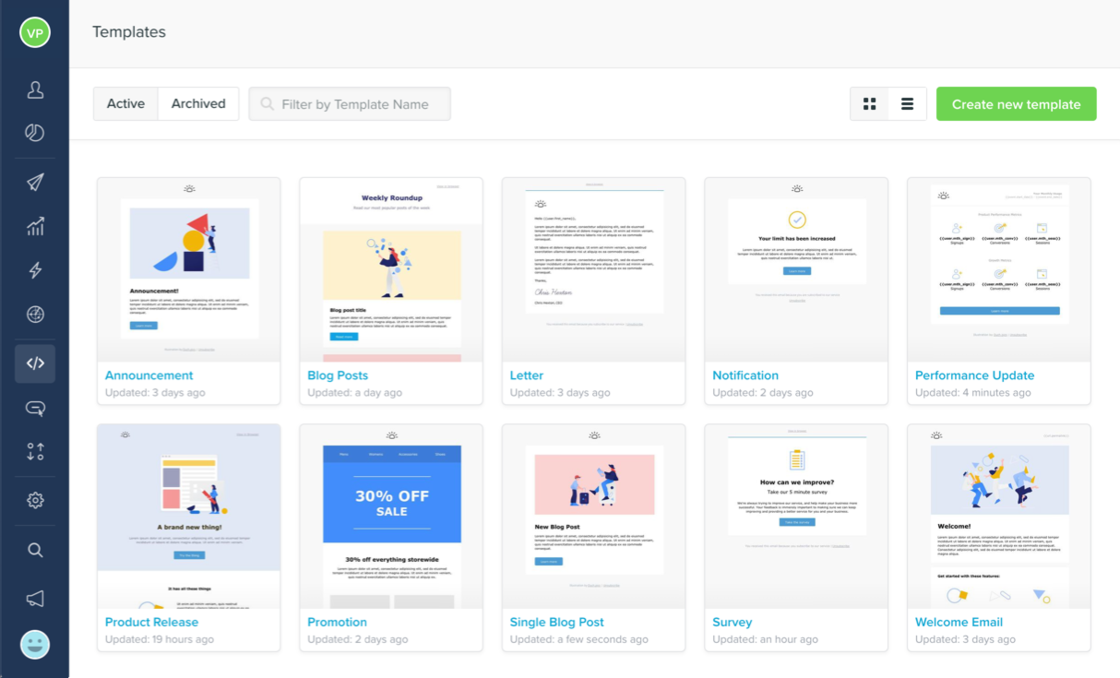 It is now possible to export workflow reports from the workflows index page. Similar to exporting a report from a newsletter, simply select some campaigns using the checkboxes, and hit the export stats button. Exports include each email or push node from each workflow.

We've made some significant improvements to the underlying architecture behind customers and logs data. This means that you will see a speed and accuracy improvement when searching for customers and logs. Importantly, this includes better partial search, making it easier to find customers when you don't have the full email addresses or identifier at hand.

To help identify exactly the details of each sent newsletter, we now show details about batched sends in the newsletter status information dropdown.

It's now possible to see how many batches were sent and the amount of customers in each batch for each newsletter sent.

We've made a small improvement to our SendGrid integration in relation to workflow campaigns.

When you are using SendGrid as your delivery provider, email campaigns inside a workflow are now being appropriately tagged to help you identify them in your SendGrid account.

When cloning a campaign across projects, segments referenced in the cloned campaign will now only be copied if a segment with the same name does not already exist in the target project.

This improvement helps to make sure your segments are not getting duplicated in your projects unnecessarily and should result in tidier projects all round.

Adding a converged branch to a path

It's now possible to add a converged branch between existing nodes. This makes it easier to add branch logic that you only want to apply to a small part of your workflow, or if you want to adjust your existing workflow.

We fixed an issue with white space characters being added to HTML-only templates that would affect rendering on the Gmail client app on some older iOS versions.

Fixed a bug that resulted in an error when trying to clone workflows which have brackets (parentheses) in the title.

Fixed a bug where click reports did not load properly on the reports page for some campaigns.

We've fixed a bug that would make it seem like the 'All iOS Customers' or 'All Android Customers' segment was not being refreshed when hitting the 'refresh' button.

We're happy to announce that we've now released the ability to converge branch nodes in a workflow. This has been one of our most popular feature requests relating to Workflows, so we're delighted to unleash this feature to everyone today.

Since releasing Workflows, and with the addition of the 'Branch' node, it has been apparent that converging branches back into a single path would be a logical next step. Where branches let you split customers on to different paths based on their activity or state, converging allows you to bring those customers back onto a common path. This makes for less duplication of message nodes, and allows you to arrange your customer journeys into more logical workflows.

To converge an existing branch node, simply choose the 'Converge' node from the add (+) menu below the last node on either branched path. Converging will connect paths from the closest branch node above it, this makes following the path that your customers will take straight forward.

If you have nested branch nodes, you will need to converge the last branch first, so that the parent branch node above it has only two paths to connect.

Additionally, from now on, when you add a nested branch node midway along an already converged path, the new branch will already be converged, this makes sure there are no unwanted breaks in the path.